It is not everyday that a true classic motorcycle comes up for sale. However, if you are an Italian “Superbike” aficionado (like me – I had a 1980 Laverda Jota 3CL) this magnificent example of one of Laverda’s best may just be the “ONE”  for you. 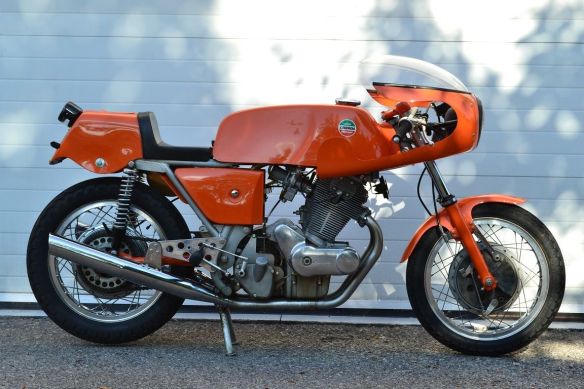 The Laverda 750 SFC (super freni competizione or or super brakes competition) was developed in 1971 from the 750S road bike and is a half-faired racer that was developed to win endurance events like the Oss 24 hours, Barcelona 24 hours and the Bol D’Or at Le Mans.

This it did, often placed first, second and third in the same race, and dominating the international endurance race circuit in 1971.

Distinguished by its characteristic orange paint which would become the company’s race department colour, its smooth aerodynamic fairing and up-swept exhaust, the SFC was Laverda’s flagship product and best advertisement, flaunting pedigree and the message of durability, quality, and exclusivity. Each SFC was hand-built in batches by the competition shop.

For several years after its introduction the SFC was one of the fastest bikes on the road, and one of the best handling too. But the high specification ensured that it was expensive, and fewer than 100 were built in each of the first three years.

Laverda’s fierce homologation SFC was powered by a tuned version of their nearly bulletproof parallel-twin and was available in any colour you wanted, as long as it was orange. You know, as good-looking as Ducatis are in red,and as classic as old British bikes are in black or silver, there’s something undeniably cool about a company choosing a “factory” colour so incredibly in-your-face, so polarising. Kawasaki’s green isn’t the prettiest colour, and it isn’t always flattering, but you certainly know which manufacturer made that lime-green plastic rocket, sitting across the street.

The SFC’s engine was based on the rugged SF1, which was introduced in 1968 as a 650cc model, although displacement was soon bumped to 750. The bikes were a bit heavy, but this was the result of their being overbuilt, and reliability benefited: the parallel-twin had five main bearings. Parts not made in house by Laverda were chosen, regardless of their country of origin, for quality and the component list reads like a “best of” of 1970’s motorcycling performance: Ceriani, Bosch, Nippon-Denso…

Relatively unstressed in road-going form, the twin was capable of much more power, and the SFC was tuned to make almost 80hp. Given its rugged nature it’s no surprise that the bike performed well in endurance racing: many SFC’s come with their headlights and turn signals boxed up and unused

Although it weighed a considerable 230kg, the wheelbase was a moderate 1,460mm and the tall SFC was a competent handler. Everything about it screamed racing, particularly with the optional two-into-one megaphone exhaust. There were no turn indicators, and the only instrumentation was a single Smiths tachometer mounted on a crude bracket in the fairing. The rider stretched out over the long 25-litre fibreglass fuel tank to crouch under the lowest fairing screen of any production motorcycle. Although one concession was made to civility, an electric start, the 750SFC was not designed for tooling around town.. 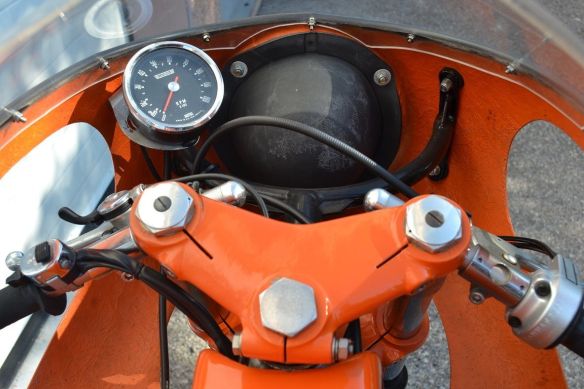 From the original eBay listing: 1972 Laverda SFC for Sale 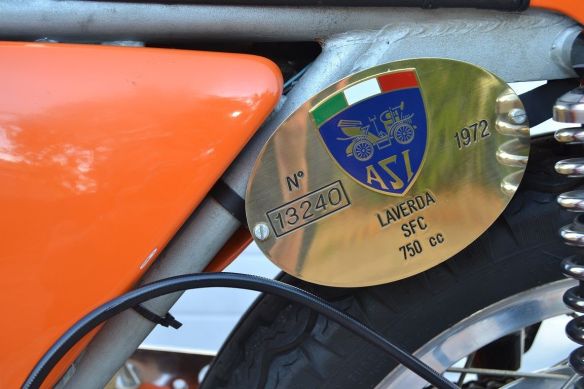 Bidding is up to US$30,100.00 with several days left on the auction.  There is no doubt it will go much higher: with under 600 ever made. These are some of the most desirable motorcycles of the era with rarity, pedigree, and that exotic, sadly defunct “Laverda” nameplate. 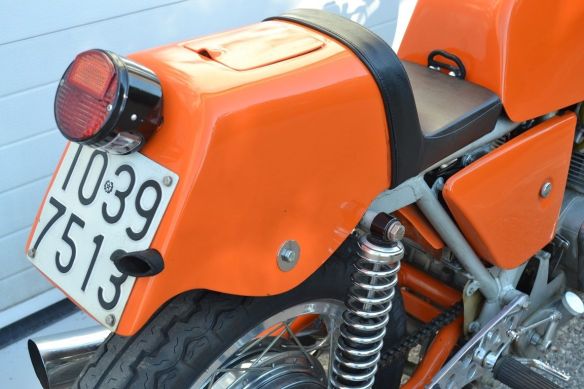 Until next time.
Michael

TrueWest Imports is now very proudly supporting Cystic Fibrosis WA. Part proceeds of all sales will be donated to CFWA. I encourage anyone who views this post to kindly make a donation. I greatly appreciate any assistance you may be able to give. 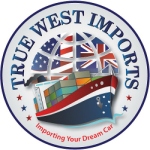 TrueWest Imports is a Proud Member of both GoodGuys Rod and Custom Association and SEMA.(Specialty Equipment Market Association)

I acknowledge Classic Sport Bike for Sale for the contents of this Post. If I have infringed copyright or of the owner of the copyright do not want this Post to be published please contact me and I will remove it.